MYTH: Suicide happens without warning.
FACT: There are almost always warning signs, but others are often unaware of the significance of the warnings or unsure about what to do.

MYTH: Suicidal people are fully intent on dying. Nothing others say or do can help.
FACT: Suicide is preventable. Most suicidal people desperately want to live; they are just unable to see alternatives to their problems.

MYTH: Once someone is suicidal, they are suicidal forever.
FACT: Most suicidal people are suicidal for only limited periods. However, someone who has made an attempt is at increased risk for future attempts.

MYTH: Talking about suicide may give someone the idea.
FACT: You don’t give a suicidal person morbid ideas by talking about suicide. The opposite is true – bringing up the subject of suicide and discussing it openly is one of the most helpful things you can do. 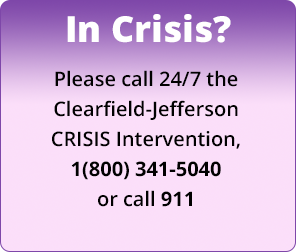 Check out our events page to find out what’s going on with the Clearfield Jefferson Suicide Prevention Team.

You can play a part in reducing the rate of suicide in Clearfield and Jefferson Counties. Join us as we meet on the 2nd Wednesday of each month to discuss, plan, and implement ideas that may change the lives of our friends, families, and neighbors.

Click here to view some great resources to help a friend or loved one.